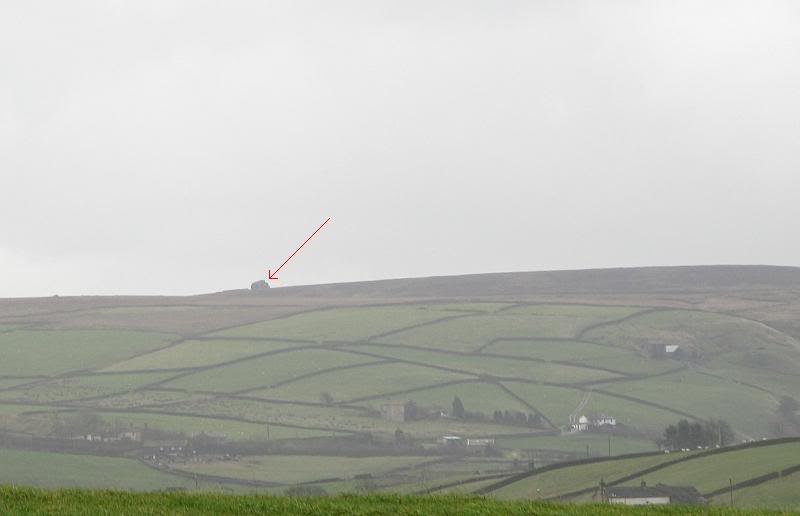 Supposedly the largest single boulder in Yorkshire it measures 29 feet long, 25 feet wide and 21 feet high.it lies at the meeting of boundaries and is a glacial erratic
Looking at the West side which is facing Pendle Hill 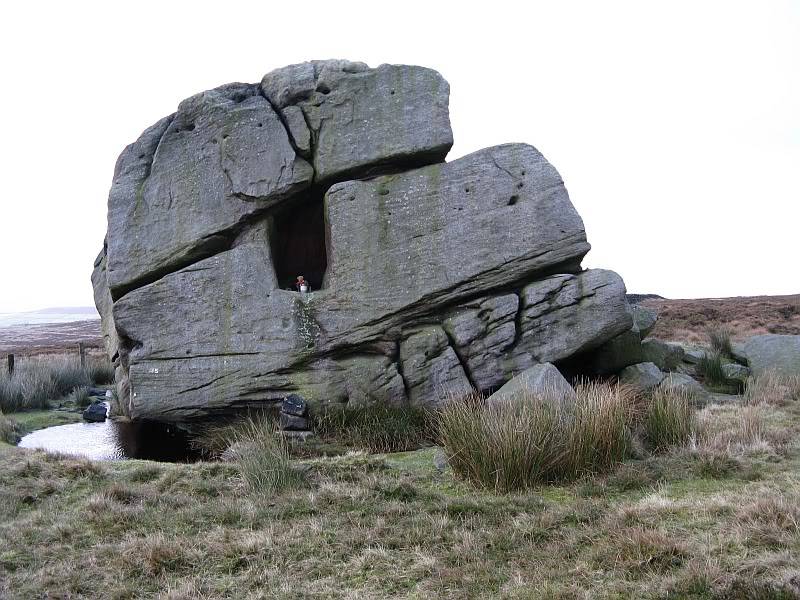 Looking at the South side 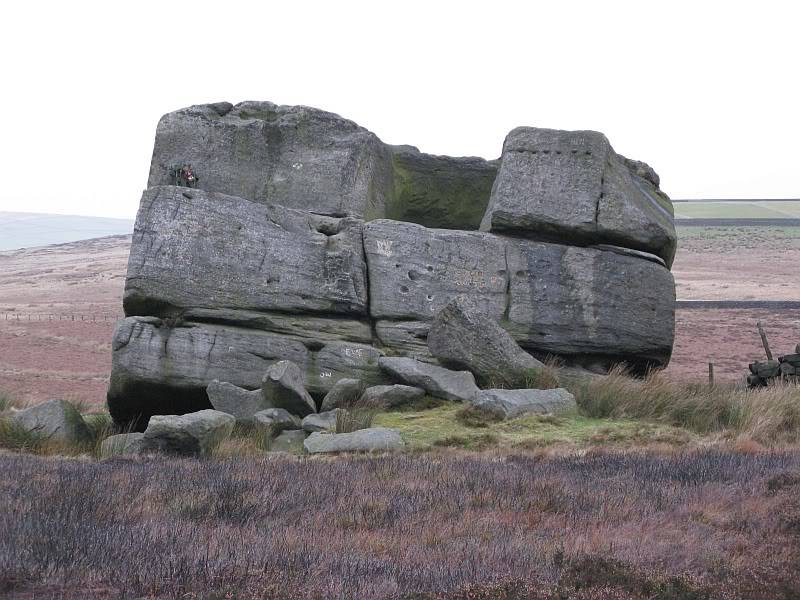 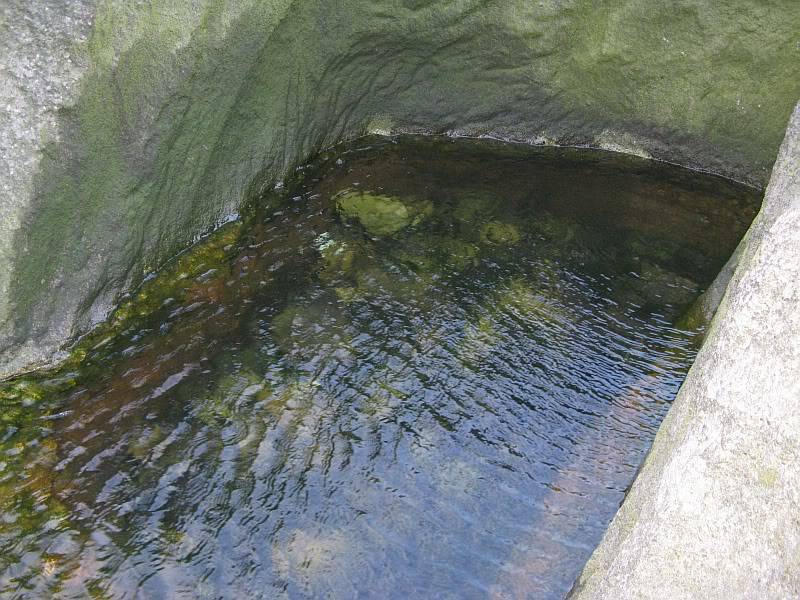 The water hole is carved out to almost the bottom of the boulder but is kept full of rocks by the landowner in case any of the local Neds fall in and drowned . I think I'd just have it full of water and award the Ned a posthumous Darwin certificate.
The stone is such a prominent landmark that the townships of Cowling, Sutton and Keighley meet here as do the wapentakes (an assembly or meeting place) of Skyrack (Leeds) and Staincliffe (Keighley, Settle, Skipton, Stainburn). Estimated at over 1,000 tons, The stone is of glacial origin and almost certainly originated on Earl Crag to the North. 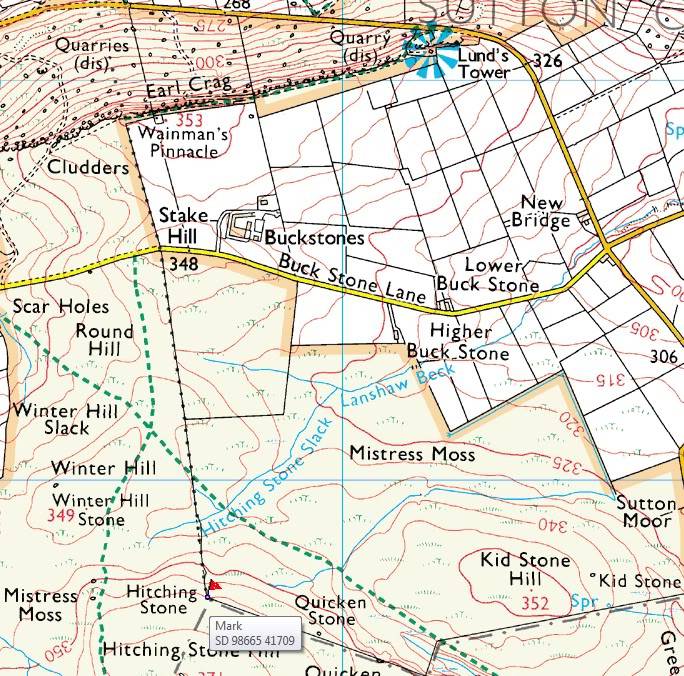 Being so prominent it is associated first with the Salt Packhorse tracks as in the middle ages salt was vital as it was not possible to grow sufficient hay to keep all the cattle through the winter as any good land was used for growing Oats,the staple foodstuff of the day.In autumn all but the breeding stock and Oxen used for ploughing were killed and salted for winter food.Salt was sourced from the Cheshire salt wiches from Northwich to Manchester.There's several place names in the area :- Salterforth,Salt Pye Farm, etc. By the middle of the 17 century self sufficient farming as a way of life was being replaced by a dual economy farming cottage textile industry.The population was growing again after the Black Death and with fresh land being taken from the moorland fringes Lime became an important commodity to sweeten the acid moorland and make mortar for all the new building.Limestone not being found in the eastern part of the Pennines had to be carried in from the West.The cottage textile industry saw improvement to many packhorse tracks as the weavers were scattered throughout the uplands which were not practical for a horse and cart to bring the wool to and the finished cloth away to market by a carrier known as a Brogger who owned a train of pack horses.It was common practice to use a train of 25+ horses, the lead ones wearing bells to warn of their approach on the narrow tracks.The bells are called Croatal bells having a lose pellet called a rumbler inside rather than suspended.The largest one in the picture made at the Robert Wells foundry at Aldbourne Wiltshire between 1755-1798. 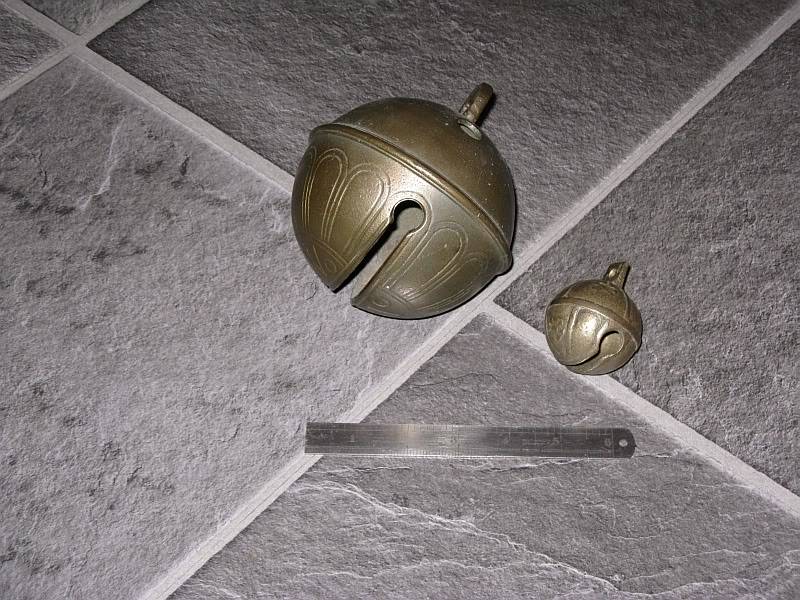 A horse would carry up to 2 1/4 cwt.(100Kg)in two evenly balanced panniers,sometimes mounted on a wooden frame called a crutch.
By the beginning of the 19th.century there were teams of carriers running regular services charging a shilling per ton per mile.Packhorse tracks were built to last and can sometimes be identified by a row of stone flags called "causey stones" about 3 feet square and 9 inches thick sunk into the ground.Valley sides had tracks cut and raked into the hillside,the word rake on maps often indicating the site of an old track.
The Hitching Stone was also the site of a Lammas fair until 1870, with the racing of horses nearby. A short distance away are two smaller stones,the one on the east called Kidstone, the other ‘Navaxstone’ which stands at the terminus of the race-course.
The Keighley 1858 Lammas fairs were also held here,though were stopped in 1870 apparently after a Typhoid outbreak attributed to troops returning from the Boer wars.
Lamma was the festival of the first wheat harvest of the year. The festival occurred on August 1, and therefore is one of the so-called quarter days of the Celtic calendar, which is closely linked with the solar calendar, based on the equinoxes and solstices. Inside the carved hollow in the west side there is a hollow tube passing through from base to the top in which can be seen the imprint of a fossil tree (Lepidodendron) which has since eroded away. In some of the hollows in the cliffs between the pinnacle and the tower, where the boulder originated, there's still some in situ.
Some from my collection 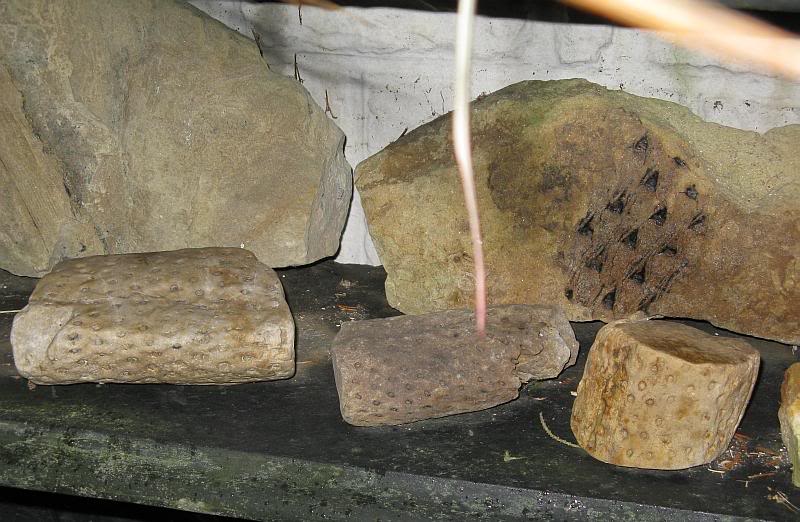 and the M1950 petrol stove (running on Panel Wipe) 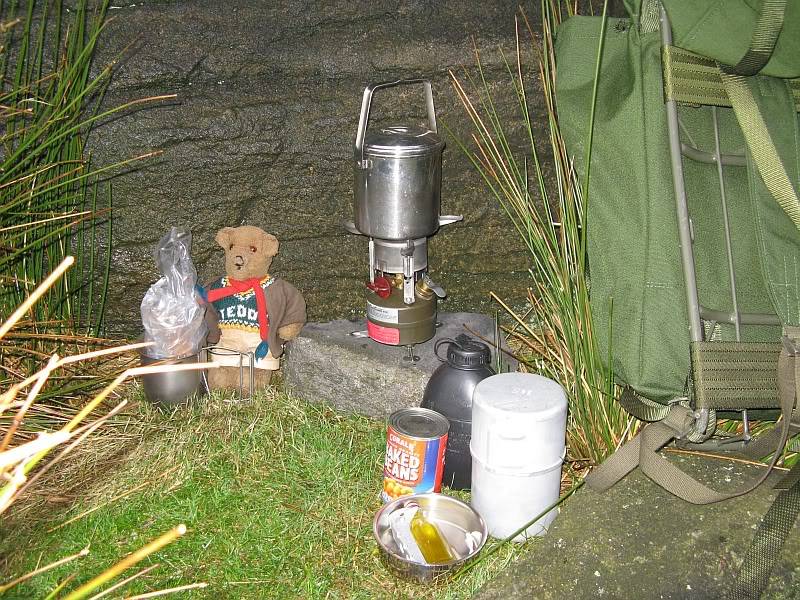 Thanks Danny, a very interesting place. How did teddy climb the Hitching Stone ? Those stones you've got look like fossillised tree stumps ? Have been on a longish walk around Downham with John (Lowergate). I'm not used to it really, but a drink at the Assheton Arms revived me ! Ray.

Yes, I think they are fossils. Danny stop using them for your fire or you'll damage them, please.

My brother has one just like those, I can assure you THEY are FOSSILS, probably sections of trees.

Danny, those are wonderful fossils!
Have you added some colour to the stone in the background to show up the pattern more clearly, or was it naturally dark like that?
Cliff
QDanT

Eskdale wrote:Danny, those are wonderful fossils!
Have you added some colour to the stone in the background to show up the pattern more clearly, or was it naturally dark like that?
Cliff

Hi Cliff, no fossils are as found with just a scrub in the sink
cheers Danny
_________________
Out here at the perimeter, there are no stars.
http://teddytourteas.blogspot.co.uk/
Paulus

Some damn good images again there Danny! But tell me, how would any of the horses gerrup to drink from the 'bath' atop of the Hitching Stone? Wouldn't they have needed ladders!?