You are not connected. Please login or register
4 posters

OS grid ref SE.015334169. The Pole Stoop or Hanging Stone is located halfway between Cowling and Keighley about half a mile east of High Pole farm, Green Sykes, and a few miles south of Sutton-in-Craven. This Medieval standing stone or marker stone is 7 foot high but leans quite a bit. It has an incised cross and below that the letter "T". Originally free standing, it is now supported by some large recumbant stones and leans at a 45 degree angle from the wall. Around it there are some other large stones as well. The stone is now a listed monument.

There are many other stones like this scattered about the Pennines between Todmorden and Keighley, many bearing crosses and strange lettering. They are often called marker stones or way-markers. One theory about the Pole Stoop was that criminals were hung on it - hence the name Hanging Stone. I think this is unlikely given the circumstances. 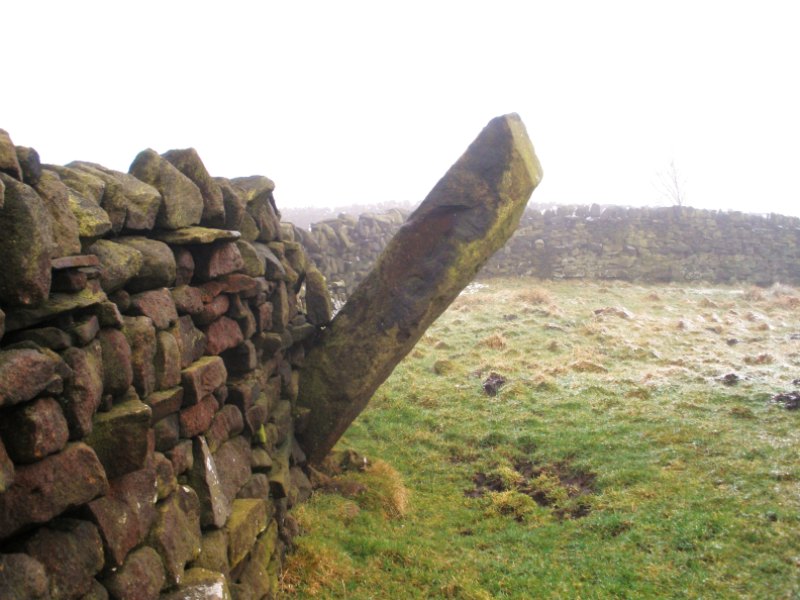 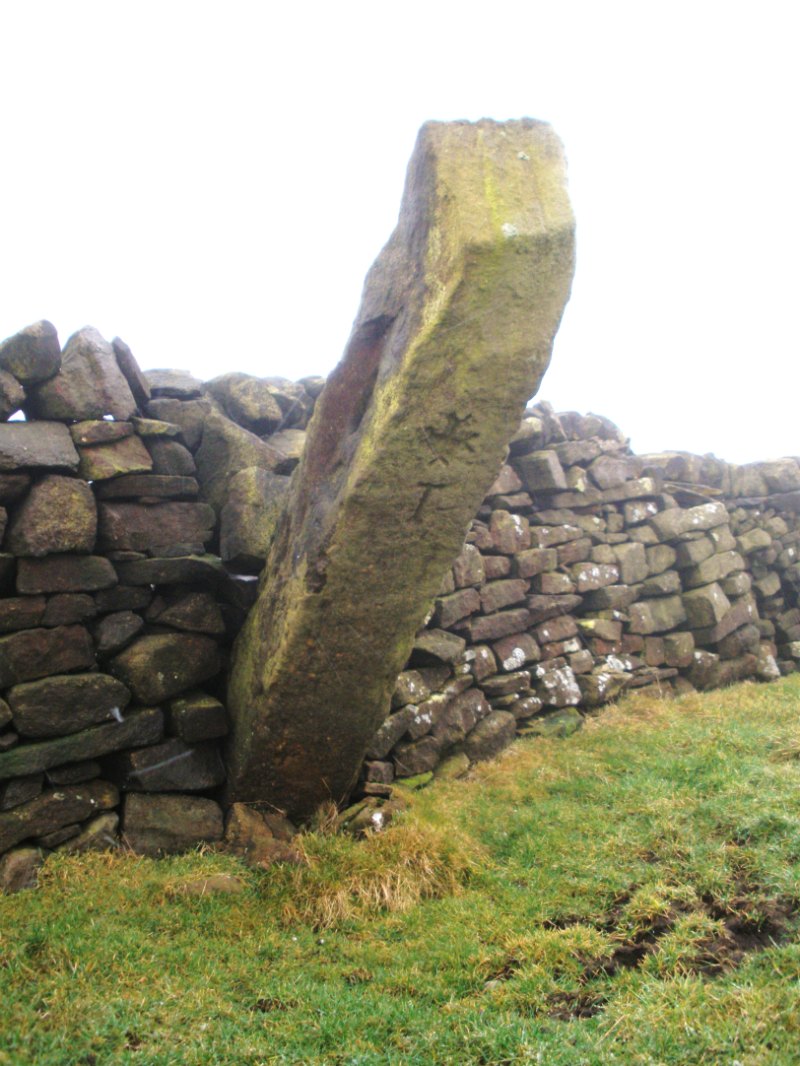 I've been up here a few times and it's in a nice position in the landscape, but the stone's medieval in nature. I have wondered, sitting upon the hill, whether a prehistoric predecessor was here in earlier days, but literary records seem to be silent on such a matter. The same can be said of the Sutton Stoop aswell...though if memory serves me, aint there a faint swastika carved on that one from the 18-19th century?

Hello Paulus, yes I know of that particular website. I think the Pole Stoop incised cross is similar to a swastika, but Latin style crosses often do look that way. I have two colour photos of the Pole Stoop - one below & I'll post the other one later. Thanks for your interest, Ray. 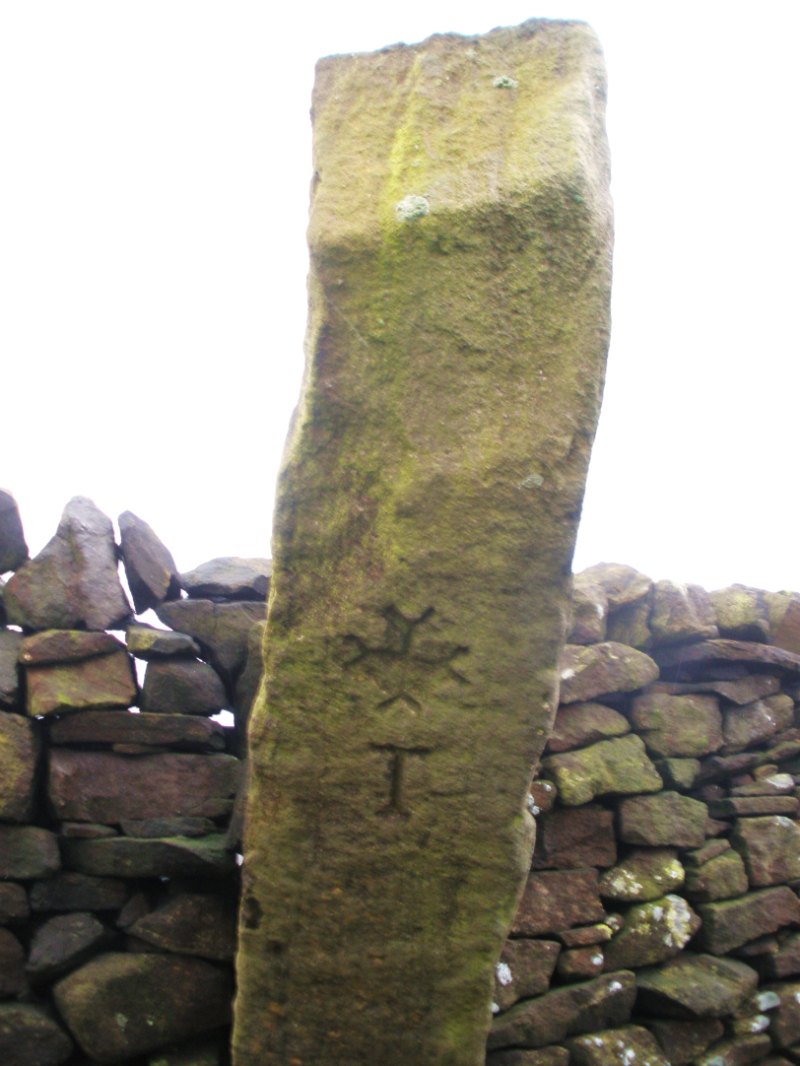 Sunbright57 wrote:...I have two colour photos of the Pole Stoop but don't know how to put them on as there dosen't seem to be any facilities to do this yet.

You can add photos to the Forum by using the symbol-gadgets above where you write a reply. You upload an image to the 'Host an Image' symbol, then copy & paste the address of the image by clicking on the symbol saying 'Image'. Try it out, but if you have problems, lemme know (send me some private message & we'll do it via there). We'll sort it over the next day or 2.

Soz I aint replied sooner, but I've been away for a fortnight. Am off out again v.shortly for a religious function: the Chelsea v Man Utd game is on soon & I can't miss it!

All the best - Paul
QDanT

stoop
Archaic - a pillar or post
variant of dialect stulpe, probably from Old Norse stolpe; see stele
stele
An upright stone or slab with an inscribed or sculptured surface 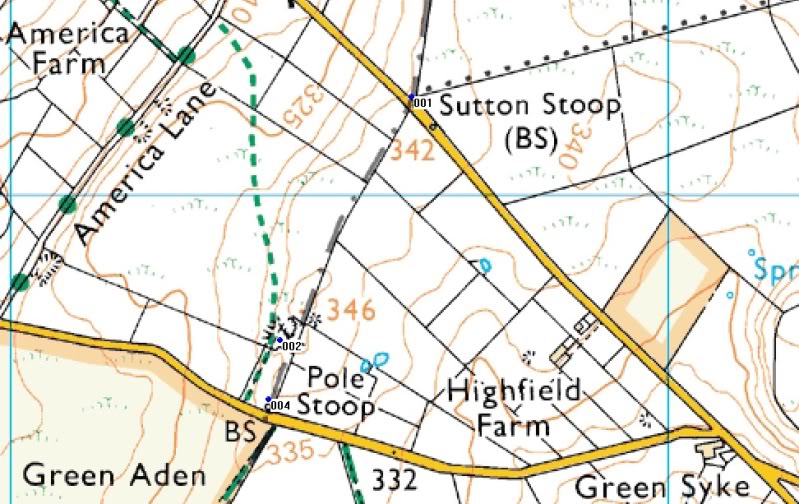 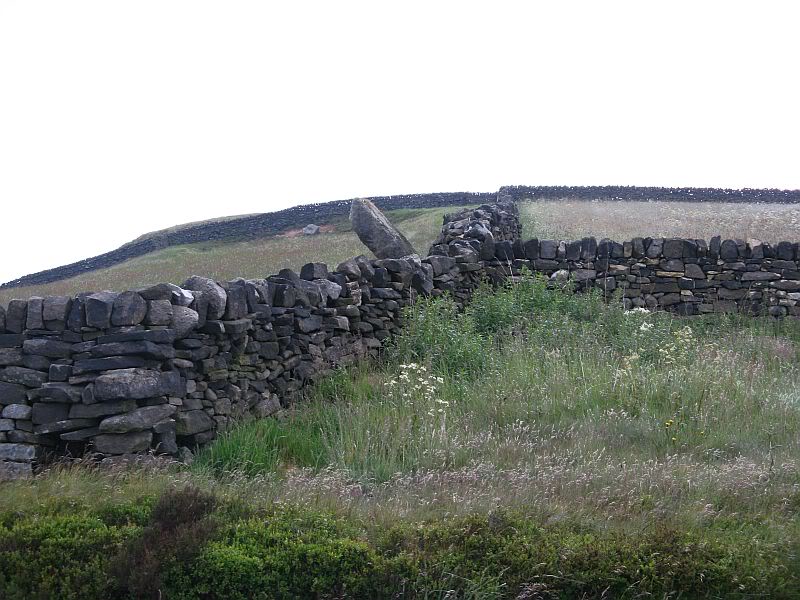 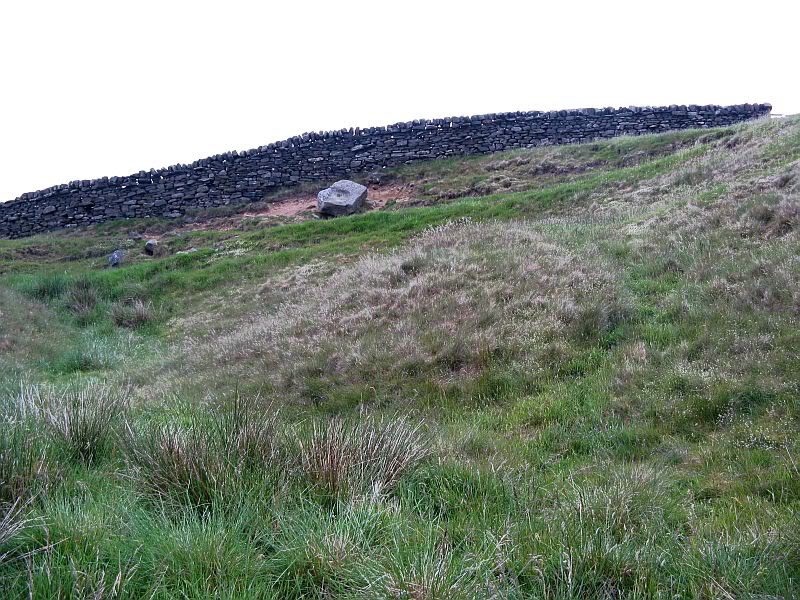 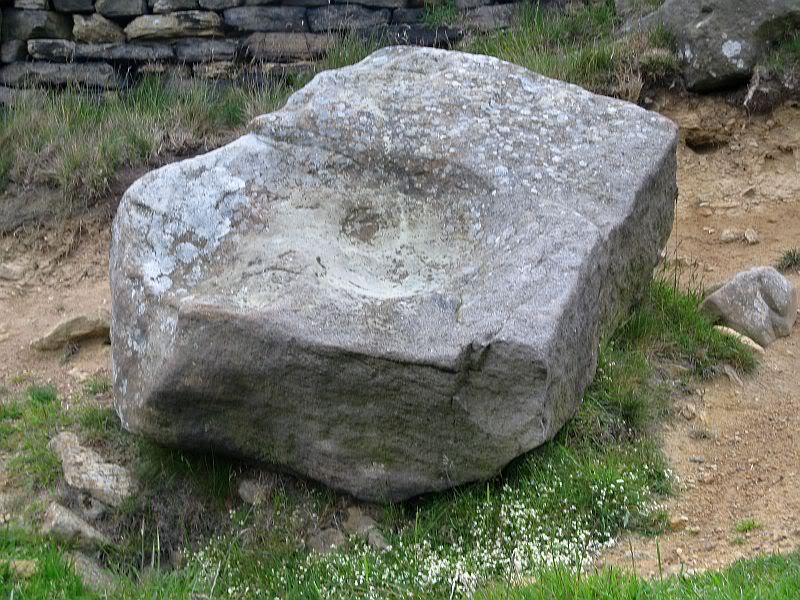 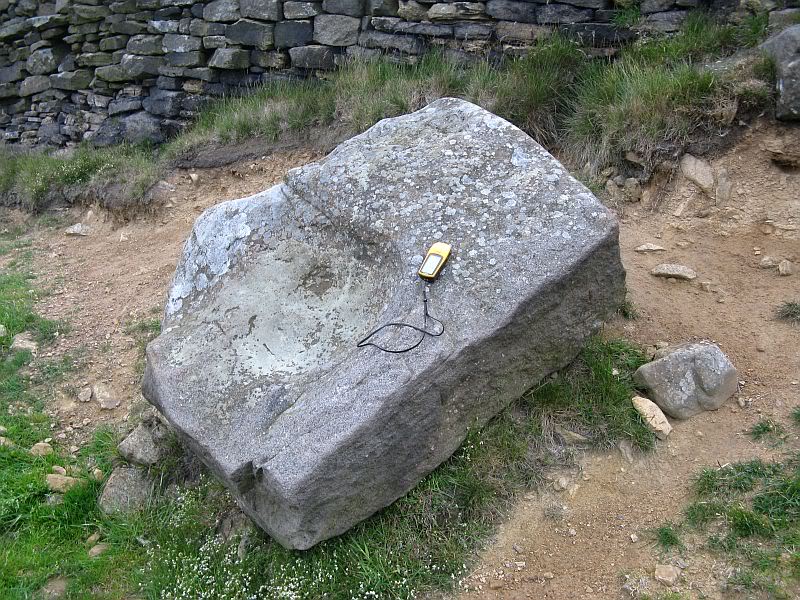 Then back to the Pole Stoop 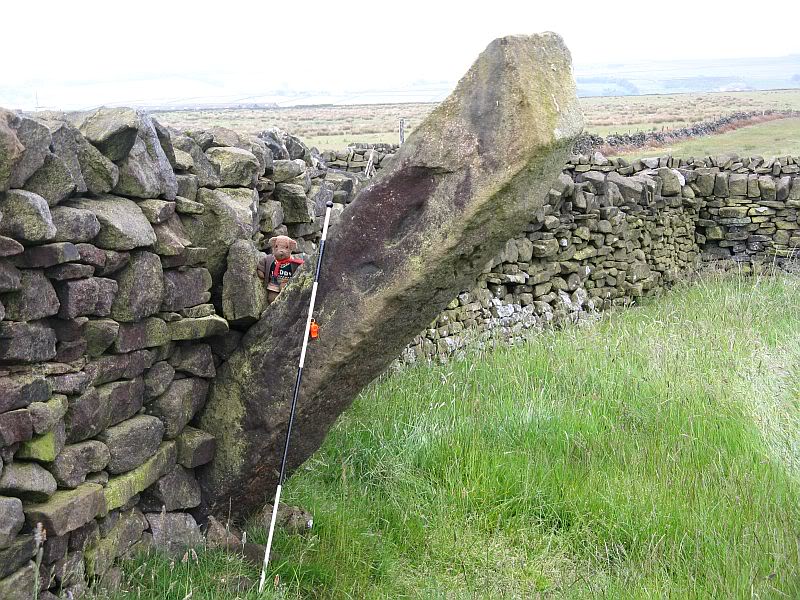 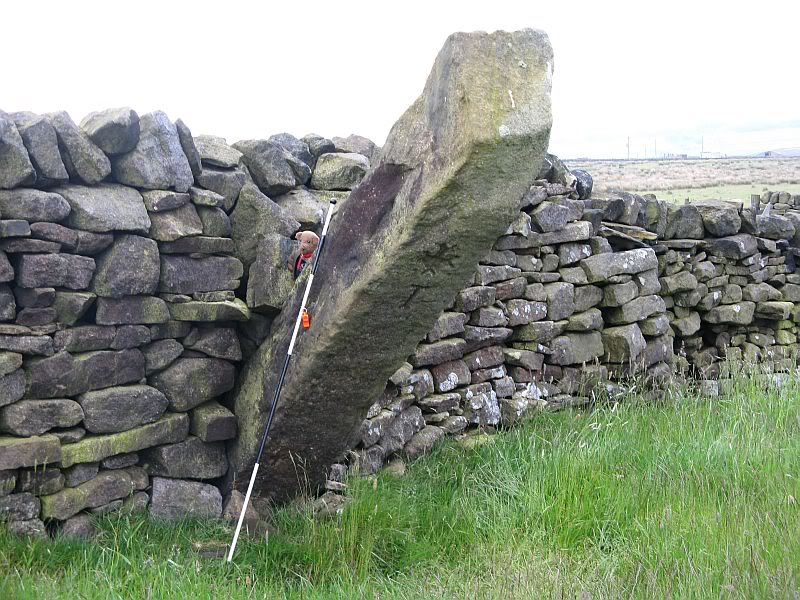 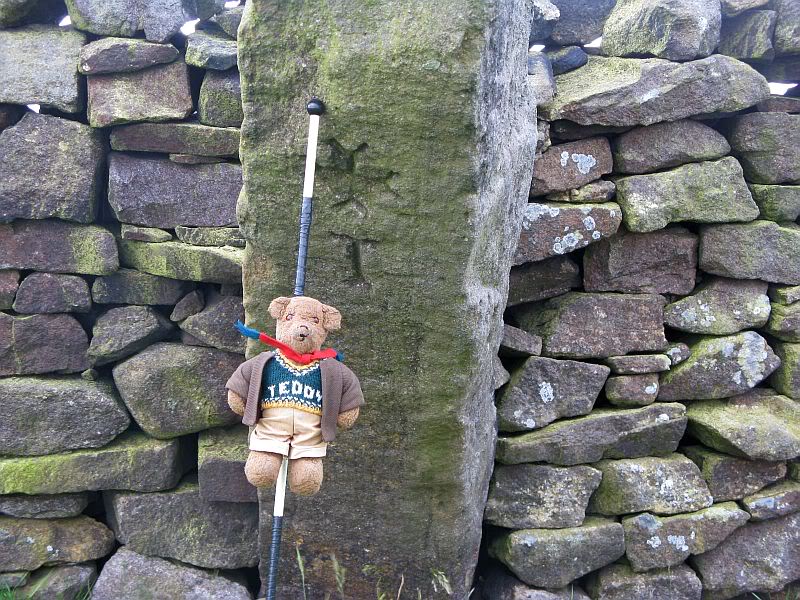 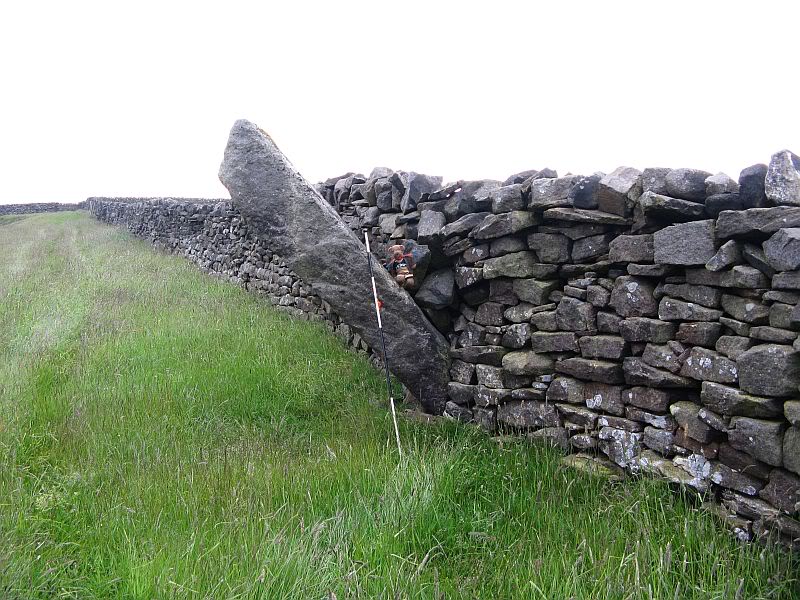 and looking back over to the road 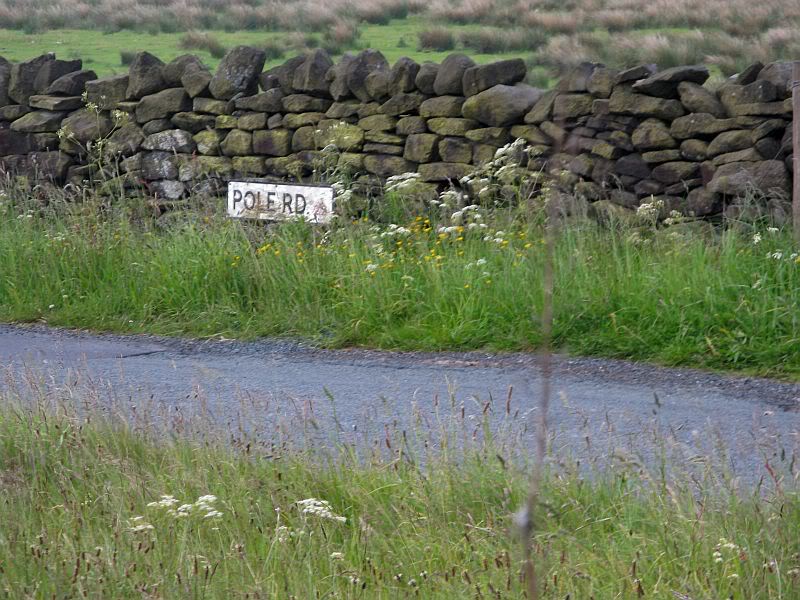 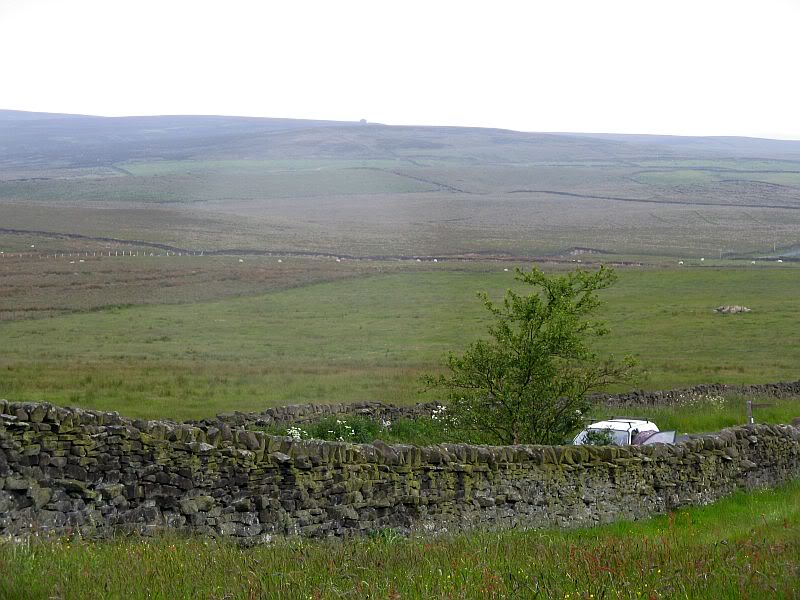 hope it's OK to link to my Blog about the Hitching stone and Pack horse routes ?

Hi Danny, you could start a new topic for The Hitching Stone if you wish, as there isn't anything under that name at the moment. Cheers. Ray

Sunbright57 wrote:Hi Danny, you could start a new topic for The Hitching Stone if you wish, as there isn't anything under that name at the moment. Cheers. Ray

OK will do cheers Danny
roblo

Firstly may I point out the Pole Stoop has never been known locally as the Hanging Stone, nor is it marked as such on any maps.  It is a boundary stone erected on a once major Keighley to Colne highway. A second stone once stood along the route on the Sutton/Stott Hill, Cowling boundary at Buckstone Lane, this stone, known as Hob Prick Lad, was broken up during the Sutton Inclosure 1815-1825. The cross on the Sutton side of the stone is a cross moline, the heraldic device of the Copley family, once lords of the manor of Sutton. The letter T on the same side, in all likelihood, stands for townend, but may also stand for terminus.  On the Keighley side of the stone are the letters WD, which stand for William, Earl of Devonshire.  William Cavendish was lord of the manor of Keighley and created Earl of Devonshire in 1618.  His manor was surveyed in 1612 and the mark on Pole Stoop was probably made between 1618 and his death in 1628.  Pole Stoop was probably erected during the years following the Highways Act 1555, which made parishes and townships responsible for the roads.  The word 'pole' is from middle English 'polle' for head and in this case refers to the head of land at the end of the highway and at the boundary.

With regard to the Hanging Stone in Sutton this boulder once stood in the area of Sutton Pinnacle (Lund's Tower). It was lost during quarrying, the long abandoned quarry is still known as Hanging Stone Quarry.
Sponsored content