You are not connected. Please login or register
Go to page :

I see the place was also known as Bleak Lowe and it's right on the local boundary line. The word 'lowe' in our region is known to represent a meeting place (which'd make sense with it being on the boundary line), but also a tumulus. And dragons and tumuli have always gone together well! Have you had a wander into the few trees that remain in this little wood to see if owt's there?

Many years ago. From a distance, the profile does look vaguely like of a tumulus but on close inspection I personally thought it seemed natural. But I'm far from an expert on these things. I agree that the name and location are very suggestive though.


Below Bleak Law Lane (or whatever it's new title) I see there was a Cross Lane. Any old cross-stump still there? And have y' found owt about the curiously-named 'Wagestan', possibly a 'stone that moves' - but certainly a stone of some sort in the adjacent parish.

Cross Lane did once refer to an old cross of some description. There's also a 14th Century building nearby called Highley Hall which used to be known as Crosse Hall. I've never specifically looked for any remains but I do recall reading - possibly in Pobjoy's history of the area - that it had been destroyed.

As I originally understood it, Wagestan is just the old name for what's now called the Walton Cross (pictured on the blog post) and an Old English form of "way stone". It's a 10th Century Anglo-Saxon preaching cross close to Hartshead church on the same boundary line as Blakelaw.

However, thinking about it, it seems a bit odd that an decorated preaching cross which by all accounts stood 15 feet high as late as the 18th Century, should be prosaically referred to as a "way stone".

It seems the earliest mention is actually the foundation charter for Kirklees Priory and 19th Century antiquarians just assumed that Wagestan referred to the Walton Cross from the context, plus the fact that Walton could well be a corruption of Wagestan.

Investigating further, it seems that Walton is actually a pre-7th Century word of Brythonic origin meaning "farm in the wood" and quite common around Elmet. Hence, it's possible that actually the cross was named after the farm next to it, not the other way round, and that Wagestan could refer to another stone entirely.
Sunbright57

In a newspaper article (The Daily Express, Saturday Apr 2nd 2011) by journalist Natalie Clark, Robin Hood's true identity has long been a mystery, but she says and I quote "Yesterday it was revealed that the medieval outlaw - who robbed the rich to give to the poor - could very likely have been a yeoman farmer named Roger Godberd". "He was even captured by the Sheriff of Nottingham, documents show". She goes on to say "Author David Baldwin believes he has unmasked the outlaw after decades researching the story". "The retired University of Leicester lecturer found that Godberd led a band of men who robbed travellers". "He was also accused of poaching deer in Sherwood Forest along with his companion Walter Devyas - believed to be the Little John of popular legend". Mr Baldwin, 64, said "There are probably several outlaws whose deeds have contributed to the modern-day stories of Robin Hood . "But I believe there is one man whose career underpins the stories". His book - Robin Hood: The English Outlaw Unmasked - reveals how Godberd was finally pardoned and died at his farm in the 1290s.
Kai Roberts

I just thought I would mention that my book on Robin Hood's grave, "Grave Concerns: The Follies & Folklore of Robin Hood's Final Resting Place" has now been published in CFZ Press' Fortean Words series and can be ordered here . Hopefully, it'll be in local bookshops in the New Year as well.

Here's a sample of text from the introduction:

"Whilst the existence of Robin Hood’s grave is scarcely a secret, appearing on the definitive map of the area and referred to in countless non-fiction sources concerned with the legend of Robin Hood, for the last fifty years it has been regarded as nothing but an annoyance by its custodians.

It lies on private land without any right of access and visitors are categorically discouraged. Whilst this situation has improved over the last decade, opportunities for anybody wishing to glimpse the burial site of this legendary hero remain few and far betwee. For Robin’s modern followers, it has become an immensely contentious issue.

The subject of this book is a location rather than an individual. Countless volumes have been written on the topic of Robin Hood by some of the finest scholars of medieval history and literature in Britain and this tome does not seek to rival them.

Arguments pertaining to the historical reality or otherwise of the outlaw will be discussed here only where they directly concern his grave. With regard to Robin Hood, the question for this book is not whether he is really buried at Kirklees but, for want of definitive proof either way, how that tradition became so firmly attached to the site. Hopefully, it will illustrate that Robin Hood’s grave is a site of historical interest quite irrespective of its ‘authenticity’.

For Kirklees certainly seems to attract strong beliefs, and in many cases changing perceptions of the site itself have coloured the content of those beliefs. Studying Kirklees and the various legends to have grown up around it allows us an insight into the reciprocal relationship between people and place.

Of particular interest is the extent to which the state of Robin Hood’s grave in the modern era and all the associated disputes have determined the interpretation of the paranormal phenomena witnessed in the vicinity of the site today. In this regard, it is a study in modern myth-making." 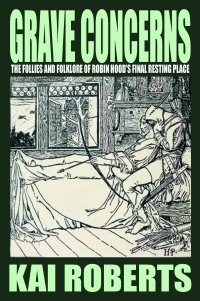 Hi Kai and everyone,

I have managed to get on here at long last and am eagerly awaiting Kai's book, coming this afternoon!

I have been very involved with this situation for nearly 30 years--I guess I might be mentioned in the book! My website is www.robinhoodyorkshire.co.uk

I have written four books about the matter also, and am thrilled that Kai has taken it it. Just to add at this point that Tony Robinson did not find anything out new, we already ahd all the information that he "discovered"--and had published it, and he of course was given free access to the siets, no problems, by the late Lady Armytage. The rest of us had to be outlaws and climbg over the wall!

Hi Damiana, welcome to TNA. Yes, well Tony Robinson would get access to all areas - its because of who he is. You only need say Time Team and you're in there. Like the name, by the way.
damiana

Absolutely--dollars talk! Having now read Kai's book he does justice to the whole disgraceful situation. There are only a few minor points I would disagree with him on, but I thank him for pulling this entire mess together and putting it on record! He is no cap doffer!

But it is not very pleasant when some "celebrity"--ie Baldrick--, quite clearly does not research properly a situation that has already been researched and published,and then says he has dicovered something new!!!! either his team is not up to the mark cos they do it all again, or surely a proper research team would have found our local stuff. Actually I was told that the the Nottinghamites had told the research team to stay away from the Yorkshire Robin Hood Society as they were "dodgy"--be that as it may!!! what kind of research team would take that at face value. I did write to the tv people and got a reply that such had been the case, but they would not say who ahd said it, though I can certainly guess who! They sent me a signed photo of Tone which I threw straight in the bin!

There is tons more than Kai wrote about, and he covered a whole lot quite fairly, it simply would not have been possibly to cover it all, but believe me what Kai has written is only the tip of the iceburg, I have tons more--Kai has seen most of it, but I used to print all the abuse I got off the message boards till it got too much, he has certainly covered the main points very well and after the Red Monkey debacle I did wonder if he would be nobbled also,

I think Tony Robinson is better at Time Team, some proffessional people on that who do know their stuff. Love the comment about Tony's photo being thrown into the bin. Poor Tony he does his best, most of the time.


The book is brilliant. It is very fair and well researched and it has gone a long way to vindicate all the rubbish that was thrown at the Yorkshire Robin Hood Society from Kirklees--and others. This is only part of the book however, and was Kai's own conclusions from the files I gave him.