A few of us are gonna be wandering up to the Twelve Apostles in a few days for the Winter Solstice sunrise - all being well! The snow's covering the moor as I look, but if She aint pissing it down too much we're gonna be wandering up there from abaat 6am onwards. If any other nutters fancy gerrin up there to witness this 'ere double-event of winter solstice sunrise coicinding with the lunar eclipse (a truly magickal event which might awaken the otherwise deadened genius loci of that site), we'll see you up there!

If we're frozen solid and stuck to the ground, just leave us there to rot & fertilize the soil!

I shall be on Pendle above Newchurch with the Lancashire Earth Pathways Folk, a large fire going roasting a full sheep stuffed with apples, oranges, onions and garlic to be served with a gallon of mixed spirits.

Twas a freezing morning indeed t'other day. Much colder than the measly -8 C it was telling on the TV! Summat a bit closer to -15 C when we got here, to the cup-marked Winter Hill Stone near Cowling, to watch and see if the midwinter sun rose above or close to the legendary Hitching Stone . This was the result, with the Hitching Stone on the horizon a short distance to the left: 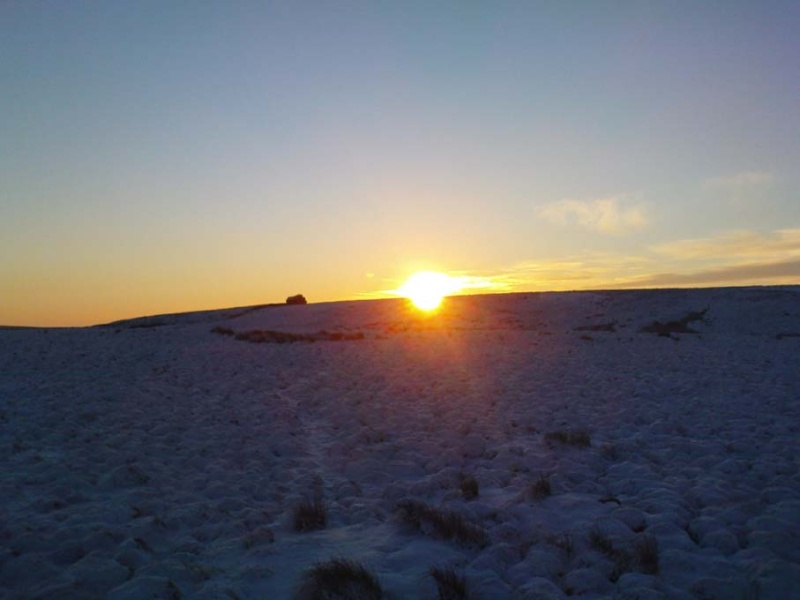 Not sure whether the sun would have been a bit closer to rising above the Hitching Stone 5000 years earlier or not & I aint checked any astroarchaeo-software to see if it was a few degrees of arc closer in the days when the cup-marks were etched. Summat to check in t' future sometime perhaps... It was a bloody superb morning though, albeit a little cold. However, we did have one very unfortunate casualty, which I'll perhaps mention later...
Paulus

...Nearly forgot...the reason we got no images of the lunar eclipse setting was that the cloud covered the western sky where it set. The moon was in full view for us before the eclipse started, and though we got a slight view of the initial eclipse, the Moon was too low down and the clouds put it outta sight. A pity....
lowergate

this is NOT closing time

C U 2morrow you old red

this is NOT closing time

C U 2morrow you old red

After the uncertainty of that morning & realising how serious this was, then the relief of hearing his voice on the phone today, I have to admit, I shed a tear or two.

Thank Goodness he was in the right place at the right time (sort of speak). If he had wandered off on his own that morning........ I dread to think!

It made me wonder if the Hare that we saw at the time of his heart attack was in anyway symbolic or just a coincidence?

Anyway, he is on the mend

Just to clarify for those who might wanna know: our Lord and Holy Fruitbat, Dave Hazell, upon this year's winter solstice sojourn onto the Yorkshire moors, collapsed in the freezing snow and had a heart attack on our way back from the Hitching Stone and Winter Hill Stone.

Of all the fucking places to have a cardiac, he had to choose the moors! These moors of all places. If we'd have gone up to Ilkley Moor as we initially planned, to visit the Twelve Apostles stone circle, the fella would've died. Simple as that. Thankfully we changed our plans and went up to the Hitching Stone instead. Next year however, we're gonna head deep into the wilderness - just to see how his heart hold's out - and see if he can do a proper job of things!

Anyway - a massive huge heart-felt thanks to the lads from the Airedale Hospital who drove up in the ambulance to collect his carcass off the moors, and to the brilliant people in the NHS who do immaculate work for people. Truly immaculate people! Thankfully, due to the utterly freezing weather on the moors (about -10), Dave was kept on ice until the paramedics lads arrived, then we defrosted him (I insisted on giving mouth-to-mouth - despite there being no need!) and they got him safely into Airedale Hospital, where they duly fixed him after keeping him in for several days. He was then taken over the Leeds General Infirmary for open-heart surgery - and we can only give an immense "thank you" to those brilliant surgeons and nurses who not only fixed him back-up, but had to put up with him waffling on and on, deep into the night. As a result of his excessive waffling, he's to being discharged tomorrow, to give the nursing staff's ears a damn good rest!

We'll see Dave over the next few days and hopefully, in a few months we can get him back onto the hills walking and seeking out ancient sites. Truly "Get Well Soon" Dave! And let's see if we can keep any further cardiacs on hold for a good 20 years or more! See y' soon mate!

All the very best Dave - Paul 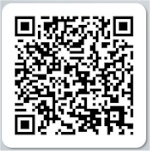 good grief! I hope you heal up well Dave.
Glad to hear you got the help in time, fabulous people!

Seasons Greets to you all,
Pete
cropredy

A poem about a frozen ticker , perhaps??

All the seasons best to You one and all.
Kevin
Paulus

Aye, that's the fella Kev. Thought you might this one of his:

Yes Kev, That is he. He was rushed from Airedale to LGI Yesterday after a rupture, but he is recovering well.

cropredy wrote: A poem about a frozen ticker , perhaps??

Dave was rushed to hospital,
after feeling quite sick.
Now I know he has a heart,
and not a swinging brick

cropredy wrote:All the seasons best to You one and all.

Seasons Greetings to all

It was just a winters stone tale,
When dave nearly fell through the veil,
His friends cried NO ,thar's to meet twelve apostles first,
Upon't moor bar tat, he'd gone real pale,
But after some real ale,pirked Him up,
And was ready to hitch hike about this galaxy for longer,
Afor kicking't bucket that We all carry up't hill and dale.

All the best to Mr Hazell, I really enjoyed Your blog, I wonder if He peeped as he went through the veil?
kevin

I am very drunk

cropredy wrote:
Is this He??
http://dave-hazell-blog-poems.blogspot.com/

Love the vid cropready. I was once mistaken for David Essex, actually; so I went along with it. Plunkett, still thinks it was Essex, who tried to nick his wallet.


There was a moaning bastard,
He wasn’t very nice.
And everybody said he had
An heart as cold as ice.
Next to him Bill Sykes, was charming,
And Scrooge, was profligate.
So the Gods conspired to visit him
With a,.. most awful fate.
As he walked one winter solstice
Upon a frozen moor
A missile sent from otherworld
Knocked him to the floor
Yes, as he did tramp and grunt and groan,
And curse and cough and fart.
An arrow of the Shining Ones
Struck his manky heart.
"Rejoice! Rejoice!" The Faerie cried.
"Rejoice and have no pity,
For now the land is cleans-ed
Of something really shitty!”

But deep below the frozen moor
In warm and foetid barrows.
Dwelt those who scorned the Faerie ones,
And did not fear their arrows.
Where secretly was worshipp-ed.
The greatest ever poet,
That picked his nose on Sundays,
And called the King, “a Scroat!”
Where monstrous slimy crawling things
Would alter temporal fates.
To confound the plans of Faerie folk,
Who fucked about their mates.
A shiny spinning silver worm
Woven, with Druid dark art,
Was sent to turn the Faerie shaft
From the poet’s black heart.
On Mithras Eve, he rose again
And soon was on his way,
And the moors were filled with birdsong,
On a joyful Christmas day.
“His dropping meant no shopping”
Sang the Moorhen, Gulls, and Pheasants
“The lengths some swine will go to
So’s they can’t buy Christmas presents.”

By all that's holy I am glad that you are ok.
Take it easy and look after youself.

Seasons greetings for the turn from death to rebirth!

Thanks mick, that's how I'm looking at it. Death to rebirth.
Next year, I'll try to keep it metaphorical, and balls to the ethnomethodology.
Paulus

Good to have y' back with us Dave! All that lounging abaat y' were doing upon t' moors t'other day, acting t' goat, never fooled anyone. Nice to sithee back where y' belong: cooced-up inside four-walls pacing abaat doing "normal" thiings like watching tele & stuff. None o' this walking t'moors bollox like some puffter, listening to bird-songs, gazing into clouds, meditating and sitting with rocks and stream and feeling the Earth amidst us. It's all bullshit mate. Gay-boy tranny fuctup nonsense!

Now switch Corrie on, watcha bitta normal living, then check out Emmerdale later. That's wot y' need to be doing! Acting like them real middle-class folk - proper people who know about reality from the safety of their comfort-zones.

Whilst out on a ramble in wessex,
A bonny lass said Dave looked like Essex,
T'was His wallet She fancied,
And thus flattered to decieve Him ,
Then years later up near hitching,
After She'd gone and ditched him,

She'd Had his heart all flustered,
When He found that she'd emptied his wallet,
And ran off with who she said was essex,
But when the fairies he was out walking with saw the picture,
they cried "thats not Essex, it's compo
But She's reet about't resemblance."

This left old dave broken hearted,
not that She said he looked like compo,
Or ditched Him whilst He was out a rambling,
But to think She only wanted His wallet,
All ten bob note that was in it.

This stopped old dave in His tracks,
To looose that ten bob note was too much,
His heart missed a beat, and He fell off his feet,
And slid like a sledge of't moor.

The fairies sent for't ambulance,
And legged it before they had to pay for it.
Their all heart those Yokshire fairies,
Thanfully as dave fell, he landed on a fiver,
Now he's as reet as rain.

And staying sober (for a while)

Thank you all for helping my old friend of some years

And staying sober (for a while)...

That'd be good mate! We could then crack-on with some literary projects in the coming months.

And we need to make sure Dave doesn't overdo things in the coming few months aswell. Sounds like good things are emerging from bad shit - which is always a very good sign...