On the recent Bleasdale Fairy Holes day out I talked to a couple of people about how Stonehenge had been rebuilt and when I found the links I'd put them on here :-

How Restorers 'Improved' Stonehenge
By Simon De Bruxelles
A million visitors a year go to the site on Salisbury Plain to admire what they believe are the untouched remains of the 4,000-year-old temple. What they do not learn from the official guidebooks is that virtually every stone has been re-erected, straightened or reset in a concrete boot by well-meaning restorers who "improved" the monument between 1901 and 1964.
Details of the restoration program were dropped from English Heritageís guides in the 1960s. Even the organizationís standard coffee table work, Stonehenge ó Mysteries of the Stones and Landscape, barely mentions work that included the replacement of a giant lintel and the re-erection of fallen stones.
The full extent of the rebuilding was uncovered by Brian Edwards, a PhD student, while he was researching for his doctorate at the University of the West of England in Bristol. He turned his attention to Stonehenge after investigating the re-erection in the 1920s of standing stones at Avebury in Wiltshire. He concluded that modern day Avebury is to a large extent the creation of the gentleman archaeologist Alexander Keiller, who virtually rebuilt it.
Although Stonehenge has not been reconstructed on the scale of Avebury, the extent of the rebuilding is clear when compared to a landscape painted by John Constable in 1835. It portrays the ruins in a far greater state of dereliction.
Mr Edwards, whose findings are included in his recently published textbook Seeing History: Public History in Britain Now, said: "We have been looking at a 20th-century landscape which is reminiscent of what Stonehenge might have looked like thousands of years ago. It has been created by the heritage industry and not by prehistoric peoples.
"What we saw at the millennium is less than 50 years old. Stonehenge was historically cleansed and the true history was hidden away."
The first major restoration was carried out in 1901 when one of the largest stones was straightened and set in concrete. The next phase began in 1919, the year after Sir Cecil Chubb gave the monument to the country, and involved the most radical changes. Six stones were moved and re-erected in work conducted by Colonel William Hawley, a member of the Stonehenge Society. Cranes were used to move three more stones in 1959 and four in 1964 in response to worries about them falling. One of the three giant trilithons had its fallen lintel replaced in 1958.
Neither the official guide book nor the audio tour available to visitors goes into any detail about the rebuilding operation. The only reference is a line that states: "A number of the leaning and fallen stones have been straightened and re-erected."
After Mr Edwards published his research, English Heritage said it was considering including more details of the rebuilding in its guide books. Dave Batchelor, English Heritageís senior archaeologist, said: "The decision not to cover the work in any detail was taken before my time in the 1960s, but times have changed and we now believe this is an important piece of the Stonehenge story and should be told.
"If the excavations hadnít taken place, then Stonehenge would look very different today. Very few of the stones have not been moved."
Christopher Chippindale, curator of the Cambridge University Museum of Archaeology and Anthropology and author of the standard work on the monument, said that some of the restoration work had not been justified. "The work in the 1920s under Colonel William Hawley is a sad story. It was much too vigorous."
_________________
Out here at the perimeter, there are no stars.
http://teddytourteas.blogspot.co.uk/
deadagaindave

Thanks Dan.
I'm going to have a browse for the Constable painting.
deadagaindave 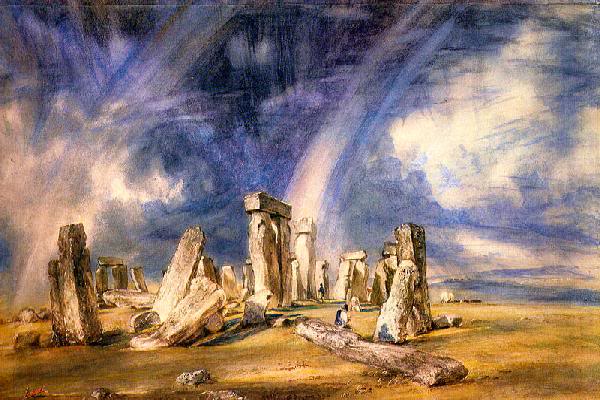 WOW ! Thanks for posting
cheers Danny
_________________
Out here at the perimeter, there are no stars.
http://teddytourteas.blogspot.co.uk/
deadagaindave

Great stuff kids. Years back, I read an article in Omni, about a bloke who inherited a quarry in yankland. The quarry was failing because of the costs involved in moving the huge stones it produced. The bloke came up with the idea of building wooden wheels around the blocks, effectively using the stones as axles. Some Egyptologists verified that wooden things they had called, sledges, found in abundance around the pyramids were obviously wheel parts, that had been built around stones.
It doesn’t surprise me that archaeologists have promoted the idea of tens of thousands of people deployed in lugging the great Stonehenge, stones around for centuries on end. It’s standard procedure for cosseted people of limited insular perspective, to attribute the quality of being as manifestly stupid as themselves to others. Overlooking the probability that people who had the obvious capacity to calculate the motions of stellar bodies with incredible accuracy, may not have been total gawpshites in other matters, such as construction technique.
The timber based mechanical devices are examined in Renfrew’s ‘Before Civilization, as is the idea that the bluestones, may have been on site, glacier deposited erratics.
I’m not sold on the idea of ceremonial highways to cart stiffs about on either. Well constructed, protected pathways, are more useful to the living than the dead. I can personally attest to this fact, having been dead myself for ages, before I was alive.