THE WRITTEN STONE near Longridge

THE WRITTEN STONE near Longridge

Os grid reference SD.626379. The Written Stone near Longridge is one of those local mysteries or curiosities that have interested me for a long time. The stone lays embedded into the side of the lane above a wall near the entrance to Cottam House farm along Written Stone Lane, locally called Boggart Lane, which is just off the B6243 about a mile and a half east of Longridge, near Dilworth. It's not too far up the lane and cannot really be missed due to its shear size. Written Stone Lane is probably part of the old Roman road between Ribchester and Lancaster.

This huge lump of carved slabstone is 9 foot long by 2 foot and about 18' deep and said to weigh several tons. It is inscribed in large letters with an inscription dating from the mid 17th century which is:- RAVFFE: RADCLIFFE: LAID: THIS STONE TO LYE: FOR: EVER: A.D. 1655. According to legend a terrible murder was commited here; the victim then began to plague the conspiritors the Radcliffe family who lived at Cottam House. Several of Ralph Radcliffe's family began to die in strange circumstances, as if they were cursed in some way. In the hope of atoning for this terrible murder, Mr Radcliffe had a large stone carved and an inscription written onto it; the hope being that the restless spirit would be calmed. But travellers going along the lane began to report strange occurrences - loud screeching sounds, bumps and bangs, people being pinched and their clothing messed about with. All this was put down to ghosts or poltegiests causing trouble.

Years later when the Radcliffe family moved away from Cottam House it's new tenent decided to try and move the stone-slab in order to use it as a buttery stone in his dairy. However, moving this great stone proved very difficult - it took six horses and many local people to move it. But during the removal a number of persons were injured and much noise seemed to come from the stone itself. When the said stone was finally moved to its new resting place the problems continued, anything placed upon it just fell off or was thrown off by unseen hands. During that first night all hell let loose with loud bangings, clatterings and other horrid noises. The next morning the farmer decided he'd had enough and the six horses and local people were asked to move the stone back to it's original place, but oddly enough this time only one horse was required - the stone almost moving on it's own seemingly the demonic spirit was eager to get back to where it came from and from that day on the stone has not been moved or even touched again - peace and quiet has returned to the country lane. Today, people walking past the stone seem to be unaware of it's terrible history, but, I wonder whether anyone dares to touch the stone or get too close to it now, just in case ! Let it be a warning to those who might even consider trying to take the stone away from it's place of eternal rest, and if you do be ready for the consequences.

The Written Stone near Longridge. 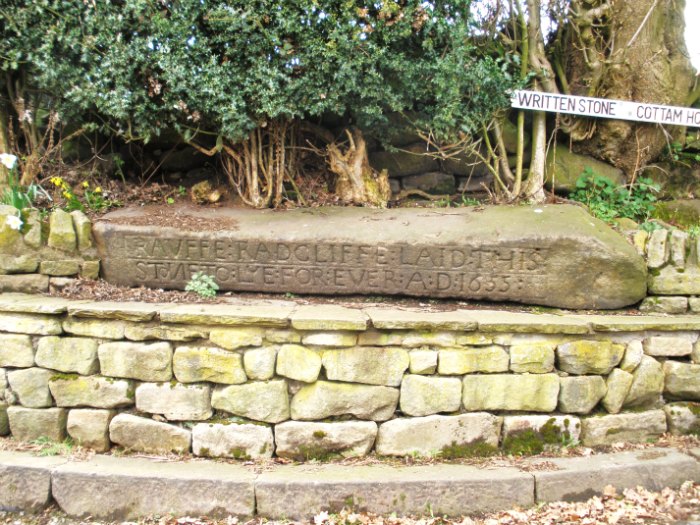 Re: THE WRITTEN STONE near Longridge

I visited the Written Stone recently and similarly became thoroughly intrigued by its history. It's a fascinatingly enigmatic site, set in a very pleasant stretch of countryside with which I wasn't hitherto especially familiar. I've written a bit about it here, if anybody's interested.
Sponsored content

Re: THE WRITTEN STONE near Longridge